We are pleased to announce this month’s UAB Medicine DAISY Award, recognizing the super-human work that nurses do for patients and families every day. Submissions and stories are reviewed each month, and then the winner is surprised at a special ceremony. 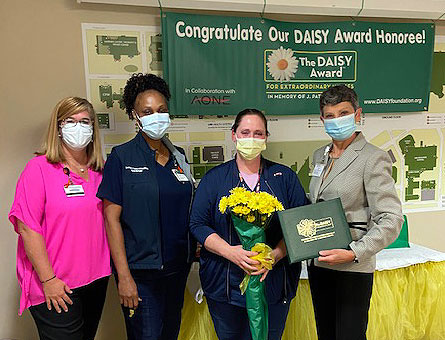 "Erin was the Charge Nurse on a particularly busy night. There were multiple new and critically injured patients admitted to the unit. One of those was a police officer who expired on this shift. Erin spent time with his family and learned that the patient’s mother was very disturbed with the thought of her son going to the morgue. Erin worked diligently to coordinate an honor walk and arranged staff from TBICU, TBNU, ATCU, and UAB Police to line the halls as he was transported out of the unit. She arranged with UAB Police and the Jefferson County Medical Examiner’s Office to have him transported directly to the Medical Examiner’s transport van, bypassing the hospital morgue.

In addition, UAB Police assisted in blocking off a portion of the street so the transport could be done in private. Then, UAB Police escorted the family to their cars safely.

Obviously, this represents a significant team effort coordinated by an extraordinary nurse! It is my understanding from her colleagues that this is not unusual behavior for Erin who is known for going above and beyond!

We are so fortunate to have her on our team and she is most deserving of this award!"