Tyler Williamson went to TEDx Birmingham’s 2017 event in March expecting to be inspired and to network and make new connections with fellow attendees. What the 27-year-old did not anticipate was that inspiration would lead him to volunteer to become a living kidney donor just seven months later.

Tyler Williamson (right) donated a kidney to Jay Ernst (left), a man he had never met. Altruistic donations have played a major role in the UAB Kidney Chain, the world's longest.Williamson, a Birmingham native, had never met anyone who needed a kidney transplant, and he was not aware that 100,000 people are currently awaiting a kidney transplant in the United States until he attended TEDx Birmingham. That is where he heard Jayme Locke, M.D., director of the UAB Kidney Chain, share an 11-minute message on the effects of kidney disease and how it attacks a person physically and mentally. Williamson also heard how, on average, 20 families see a loved one die each day while they wait for a kidney transplant that never comes.

Locke’s TEDx Birmingham message? Change the conversation. Change it from sickness and death to hope and action. Become an advocate for, and help to create, a single, national living kidney donor exchange program — one that would include paired donors and those who want to give, like Williamson, just because they are called to help their fellow man.

That was Locke’s message, and it resonated with Williamson. He saw the vision Locke has for creating a single, national living kidney donor exchange program, and the value of being an active and vocal supporter of the effort. But throughout Locke’s presentation, Williamson says he also felt himself being pulled to take an additional life-giving and lifesaving step.

“I kind of had a conversation with God as I was listening to Dr. Locke, and I knew almost immediately that this was something I had to be a part of as a living donor,” Williamson said. “I really started thinking, ‘If someone’s mom, dad, brother, sister or best friend is dying right now, and if I have two kidneys and only need one, why wouldn’t I give one of mine to save their life?’”

Williamson spoke with Locke for several minutes after her talk. At the end of their conversation, he told her he was going to register to be a living kidney donor. Two weeks later, he did. Seven months later, his donated kidney went to Hoover, Alabama, resident Jay Ernst, a 34-year-old husband and father of two. 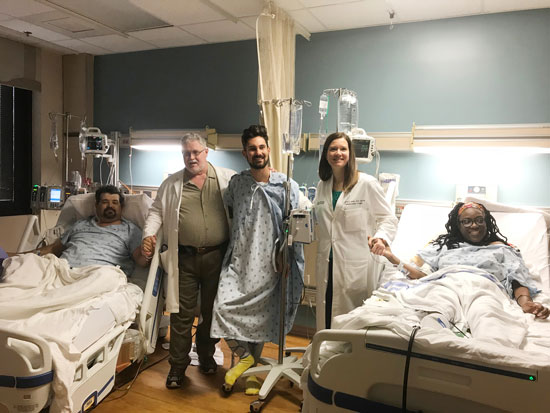 UAB surgeons Mark Deierhoi and Jayme Locke with Tyler Williamson (center), whose altruistic donation made possible transplants for Shane Holcomb (left) and Victoria Smith (right).Ernst, who was diagnosed with a kidney disease called IgA nephropathy as a 16-year-old growing up in Erie, Pennsylvania, had seen his health rapidly deteriorate over the course of the past year as his kidney function declined. His need for a transplant became urgent. Ernst had no idea he would ultimately receive a kidney from a man who came forward to donate just because he was healthy enough to do so and wanted to make someone’s life better.

“When I found out Tyler came forward to donate by himself and just wanted to give to someone he best matched with — a total stranger — I was floored,” Ernst said. “I was like, ‘Wow, how unselfish to put others before yourself like this.’ It makes you realize there is more good in this world than people believe.”

Ernst, UAB Kidney Chain recipient No. 77, was one of three people to receive a transplant Oct. 12. His friend, Lake Oswego, Oregon, native Zach Taylor, donated on behalf of Ernst to Shane Holcomb of Faulkville, Alabama, as donor and recipient pair No. 78. Holcomb’s sister and Woodville, Alabama, native Melissa McIntyre donated to Birmingham resident Victoria Smith as donor and recipient pair No. 79.

The success of the chain, says Locke, is because of people like Williamson, Taylor and McIntyre — living donors who are willing to do whatever it takes to help others in need.

“Every time someone comes forward to be a living kidney donor — whether they know someone they want to donate to or on behalf of, or whether they come forward altruistically like Tyler — I just marvel at it,” Locke said. “They are all extraordinary individuals, and they really represent the very best of our country and the world.”

Taylor, who played college football with Ernst at Washington and Jefferson College, came forward this past summer when Ernst announced on Facebook that he needed a kidney and was hoping to find a donor. Ernst had waited for months to tell friends and extended family of his declining health because he knew his soon-to-be-born-son, Cole, was going to be born with gastroschisis, a birth defect of the abdominal wall where the intestines are found outside of the baby’s body, exiting through a hole beside the belly button.

Ernst wanted the focus of family and friends to be on his wife and son, even when he found out April 12 — one day before his Cole’s birth — that he needed a kidney transplant. Ernst did not ask for a potential living donor to come forward for another 53 days, after Cole (who is now healthy and doing well) was discharged from the hospital to go home. 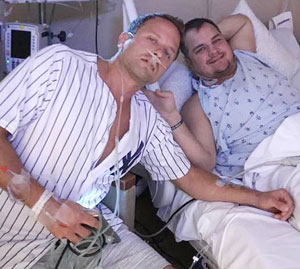 Zach Taylor played college football with Jay Ernst — and donated a kidney on his behalf.Taylor, who works as a global product line manager for Nike, had two friends who had both donated a kidney a few years ago. Their gifts and willingness to help others, Taylor says, were an inspiration to him. Taylor told himself, if he ever had the opportunity, he wanted to give to someone in need.

Taylor had no idea that someone would be his good friend, Jay. Taylor was disappointed when he didn’t match Ernst and would not be able to give directly to him, fearing it could delay an opportunity for Ernst to get a transplant for months, if not years. But when Taylor learned that he could donate to another person in need as a way of paying another’s donation gift to Ernst forward, he jumped at the opportunity. Taylor was just happy he would still be able to help his friend.

“I thought about all of the things and luxuries that I had growing up, like having a dad around to teach me how to play sports or just give me valuable life lessons,” Taylor said. “I couldn’t imagine Jay’s wife having to raise two children on her own. I looked at the donation as a way to create a better life for all of them. And when you go through the process and realize you’ve also had the added benefit of helping someone else, in my case Shane Holcomb and his wife and his three kids, it goes to yet another level. It’s really an emotional experience, and it’s an honor to just be a part of it.”

Ernst had more than 50 family members and friends volunteer to be tested to see if they were a match.

“There were people I had not seen since my senior year of high school signing up to help,” Ernst said. “That there were that many people willing to help, and that Zach was so adamant he wanted to do this for me, it was just a humbling experience all the way around.”

For Williamson, trying to capture the feeling of meeting Ernst, Taylor, Holcomb, McIntyre and Smith, and processing the impact of something so powerful, is difficult to put into words.

“To meet everyone and hear their stories, it’s sweet, beautiful, powerful, impactful, life-changing,” Williamson said. “I really think my life will never be the same because of the experience I got to have and because of the people I got to meet.”

Since the UAB Kidney Chain began four years ago and has grown quickly through the generosity of paired donors and 18 altruistic donors, Locke has maintained that it stands as a national example of the best of us and what could be.

“In order to help the most number of people, we really have to come together as a community and country, and really believe the best of our fellow man,” Locke said. 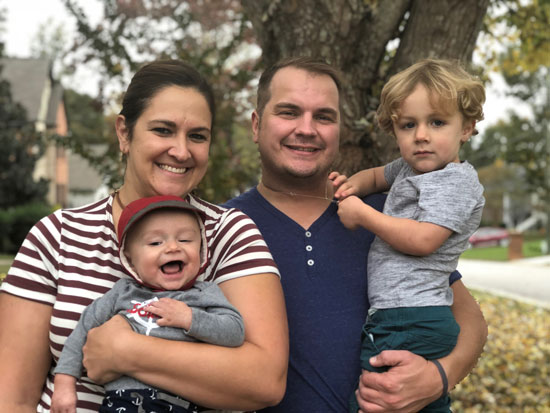 Jay and Emily Ernst with their sons Cole and BradyThat is where her idea of the single, national living kidney donor exchange program carries the possibilities further.

“If you have a pool of donor and recipient pairs that is large enough — like a national registry these pairs could enter into — you could greatly enhance the opportunity for those in need to achieve a match,” Locke said. “That’s my biggest hope, that people invest and can wrap their minds around the concept and really get behind living kidney donation. But we need other people to participate. Even if you can’t be a donor, if you can help us make this a reality and get behind that movement and support this concept of a single, national registry, you could change thousands of lives. It really will take a movement at a national level to get every American behind this concept so that we could actually see a single, national registry come to fruition.”

More transplants in the UAB Kidney Chain are scheduled for January and beyond. Those interested in exploring the possibility of being a living organ donor can fill out UAB’s online Living Kidney Donor Screening Form. To become an organ donor upon death, register now at www.alabamaorgancenter.org.