Pulmonary embolism is a life-threatening condition that accounts for approximately 100,000 deaths annually in the United States. PERT was established to ensure UAB patients, like Amanda Pullen-Hendrix, receive the best possible care for their specific situation. (Photography: Steve Wood))

“Life over limb” is not a phrase Amanda Pullen-Hendrix ever thought she would hear, especially not on her 29th birthday. But on July 12, 2020, what she at first believed was an asthma attack turned out to be a life-threatening stroke and multiple blood clots.

That morning, Pullen-Hendrix woke up gasping for breath. Her face began to droop, her speech was slurred, and the left side of her body became weak. A call to 9-1-1 had her quickly transported to UAB Hospital.

Soon, she was surrounded by the University of Alabama at Birmingham’s Pulmonary Embolism Response Team, a multidisciplinary team of medical professionals led by cardiologist Sam McElwee, MD, and pulmonologist Keith Wille, MD. The team found that Pullen-Hendrix had a massive blood clot blocking an artery in her lungs, called a pulmonary embolism. She also had an abnormal opening in her heart that allowed part of the clot in her lungs to break free and travel to her brain. This clot blocked the arteries that bring oxygen-rich blood to her brain, leading to a stroke. The team also discovered a clot causing serious blockage in the main artery of her right leg.

“The Pulmonary Embolism Response Team is a clinically diverse group of physicians who provide rapid evaluation, risk stratification and treatment recommendations for patients with acute pulmonary embolism, like Mrs. Pullen-Hendrix,” McElwee said. “With Mrs. Pullen-Hendrix’s condition, it was vital that our entire team met to look at all of the treatment options available to determine the best way to care for her situation.”

For the next 14 hours, physicians from UAB’s Cardiovascular Institute, Department of Neurosurgery, Division of Pulmonary, Allergy and Critical Care Medicine, and Division of Vascular Surgery and Endovascular Therapy worked together to save Pullen-Hendrix’s life. 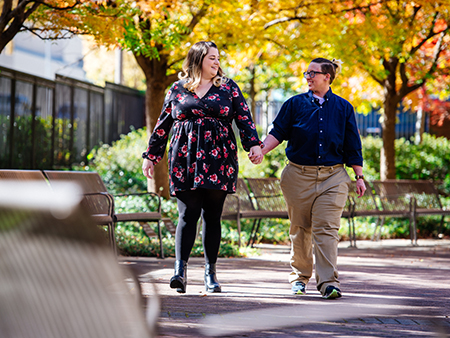 Amanda Pullen-Hendrix is now back at work and has mobility that enables her independence. (Photography: Steve Wood)

After the team successfully suctioned out the clot in her brain, they closed the hole in her heart, known as a patent foramen ovale, or PFO. After repairing the PFO, the team proceeded with the removal of the pulmonary embolism; but Pullen-Hendrix went into cardiac arrest and was subsequently placed on extracorporeal membrane oxygenation (ECMO) to keep her breathing.

While Pullen-Hendrix was on ECMO, McElwee applied his cardiac critical care expertise to help stabilize her while Mustafa Ahmed, MD, section chief of Interventional Cardiology, and his team continued working to remove the clots in her heart and lungs. The vascular team led by Danielle Sutzko, MD, surgically removed tissue in her leg in two procedures called fasciotomies, to relieve pressure and restore blood flow that was blocked by the clot in her leg.

“When they removed the clot in Amanda’s brain, her heart stopped for 10 minutes, and I was told to prepare for the reality of losing her,” said Pullen-Hendrix’s wife, Sarah. “They put her on ECMO and took her back into surgery to remove the massive clot from her leg. As they continued to work on her leg, I heard them say ‘life over limb’ several times because the blockage in her leg was so severe. I was not really thinking clearly at this point, but I had no idea how she would emotionally cope if she woke up and her entire leg was gone.”

After three days, doctors removed the tube that was helping Pullen-Hendrix breathe, and after 11 days she was taken off ECMO. She had no neurological deficits and was soon moved to UAB’s Heart and Lung Transplant Intensive Care Unit, where she underwent multiple surgeries over the next couple of weeks, including an inferior vena cava filter placement to prevent blood clots from traveling to her lungs.

A month into her hospital stay, Pullen-Hendrix was transported to UAB’s Spain Rehabilitation Center for occupational therapy and physical therapy for her leg. She was still experiencing severe nerve pain and a lack of mobility and feeling in her lower right leg. At the same time, the vascular team found a pseudoaneurysm, a ballooning of the arterial wall that required repair to keep the blood flow in her right leg. Pullen-Hendrix had three staged surgeries to repair the pseudoaneurysm in her leg.

After consulting with her physician, she learned that the chances of her gaining mobility back in her leg were very slim, so she made the decision to have an amputation. The pseudoaneurysm repair allowed Pullen-Hendrix to have a below-the-knee amputation rather than an above-the-knee amputation, which makes placement of a prosthetic leg easier.

“Although making the decision to have an amputation was slightly difficult, it was also easy at the same time,” Pullen-Hendrix said. “At this point in my experience, I felt like I already had a prosthetic that was useless to me but was constantly causing me pain. I wanted to be able to start working and living a normal life again, so I decided an amputation was the best solution for me.”

In September, Pullen-Hendrix had the amputation, and in February, she was fitted for her prosthetic.

“Standing up for the first time was emotional; but after that, my journey was about allowing myself to heal and learning how to function with this new way of life,” Pullen-Hendrix said. “It was surreal, but it was already so much better than the nerve pain I was experiencing before.”

After being fitted for her prosthetic, Pullen-Hendrix underwent her final surgery to remove the IVC filter, which she now has in a jar on her bedroom bookshelf as a reminder of all of the obstacles she has overcome during the last year. She is now back at work and has mobility that enables her independence.

“There are definitely still some hard days, but I am thankful to be alive,” Pullen-Hendrix said. “Everyone at UAB was so dedicated to my case, and I am grateful for the team that took care of me during this experience.”

“I think it is safe to say that those were the longest months of our lives,” Sarah Pullen-Hendrix said. “Amanda managed to tackle one of the hardest things she could have possibly faced like a champ, and I am truly in awe of how well she handled this.”

Pulmonary embolism is a life-threatening condition that is quite common and accounts for approximately 100,000 deaths annually in the United States. PERT was established to ensure UAB patients are receiving the best possible care for their specific situation. Pullen-Hendrix is one of more than 340 patients PERT has treated since its inception in 2018.