In April 2021, the University of Alabama at Birmingham Regional Neonatal Intensive Care Unit team celebrated as Curtis Means was discharged after 275 days in the hospital. Six months later, Curtis and his team held another celebration as he was officially named the world’s most premature infant to survive by Guinness World Records. 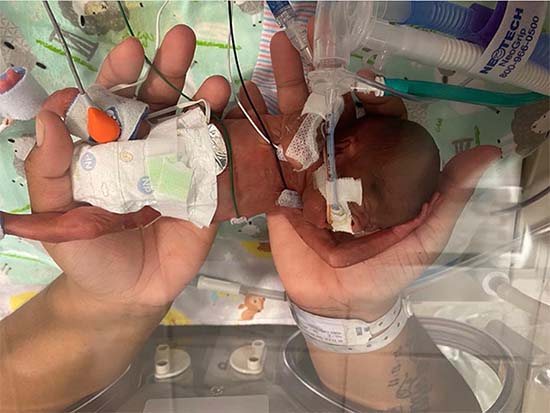 Brian Sims, M.D., Ph.D., professor of pediatrics in the UAB Division of Neonatology, was the attending physician on-call when Butler arrived.

“Numbers show that babies born so young have little to no chances of survival,” Sims said. “We typically advise for compassionate care in situations of such extremely preterm births. This allows the parents to hold their babies and cherish what little time they may have together.”

Sims told Butler the care team would take their lead from the babies, see how they respond and let them tell the team what path to take. The twins had a less than 1 percent chance of survival.

The RNICU team jumped into action. Nurses started post-birth care, and respiratory therapists quickly hooked them up to ventilators and oxygen, all hoping to increase the babies’ chances of survival. C’Asya soon showed signs she was too premature. She passed away a day later.

Curtis, however, showed signs of improvement. His heart rate and oxygen levels increased with resuscitation and additional oxygen. He was fighting for life. 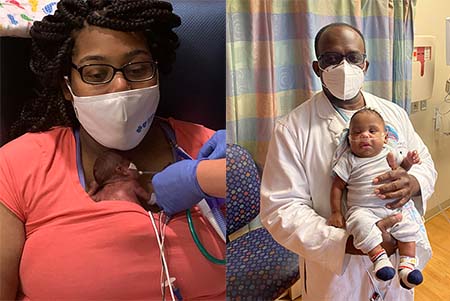 When Colm Travers, M.D., assistant professor in the Division of Neonatology, arrived at the UAB RNICU the next morning, he was astounded to see Curtis alive and responding well to treatment. Travers researches periviable infants, those born at the limits of viability, and could not recall knowing of an infant surviving at a younger gestational age than Curtis.

A baby born that young takes it one step at a time. After surviving the first day, Curtis needed to make it through the first week. The RNICU team immediately activated the UAB Golden Week Program™, a multidisciplinary effort that includes clinical guidance on respiratory support, thermoregulation, nutrition and fluid management, infection prevention, and neurological status.

“When taking care of severely premature babies, you have to take it step-by-step and day-by-day,” said Travers, who is co-director of the Golden Week Program™. “The program combines evidence-based medicine and best practices to increase a premature baby’s survival chances during their first week of life. The program has resulted in a marked reduction in mortality or severe intraventricular hemorrhage within the first week of life.”

Curtis continued defying odds, to his family’s and the team’s amazement. He survived the first week. Then the first month. His journey at UAB, however, was far from over.

Curtis received ’round-the-clock care over the next nine months. Speech therapists worked to help him start using his mouth and learn to eat. Respiratory therapists supported his breathing through various efforts as he came off the breathing machine. Nurses provided daily care, from checking vitals to soothing him to sleep, to supporting Butler as she learned the intricate care Curtis needed.

“There were days when we were unsure that he would survive,” said Sumita Gray, an RNICU nurse on Curtis’ team. “He was the youngest baby anyone had worked with, but we are a level 4 RNICU and knew we had the resources and expertise to support Curtis and his mom. We were determined to see him go home.” 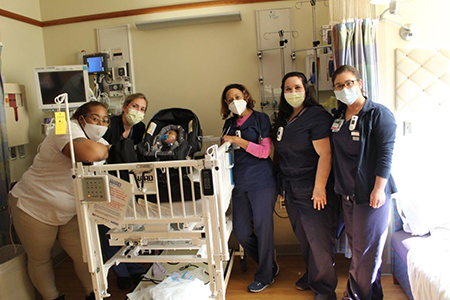