Critical Care Transport is a UAB hospital-based, inter-facility transport program for patients in the United States and worldwide who require transport from one medical facility to another. CCT has been providing medical transports for more than 30 years and has transported more than 50,000 patients. The team employs a twin-engine Cessna Citation Bravo jet for long-distance transport and three ground units for local moves. The new unit arrives at an opportune time, as CCT has been increasingly busy over recent years. The program estimates it has flown or driven more than 42 million miles, to 46 states and 38 countries. 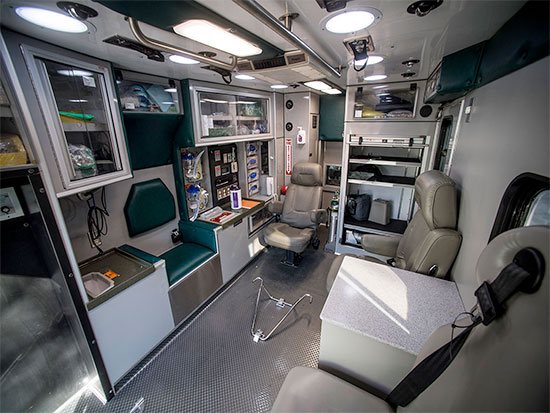 A look inside the new, rolling intensive care unit.“Before the acquisition of this unit, our last new ambulance came online five years ago, and that vehicle now has nearly 300,000 miles on it,” said Laura Lee Demmons, director of CCT. “The new ground unit will be a welcome addition to our operations, and will provide even better support for our patients.” In addition to its ability to serve as a mobile intensive care unit, the new ground unit offers a number of enhancements for patient and crew safety.

Critical Care Transport has been accredited by the Commission on Accreditation of Medical Transport Systems since 1999. CAMTS is a national and international peer review organization that promotes voluntary compliance with standards that serve its two highest priorities: quality air medical and ground patient care and safety of the transport environment. CAMTS accreditation is a mark of excellence recognized by federal, state and local government agencies, as well as private organizations and the general public.