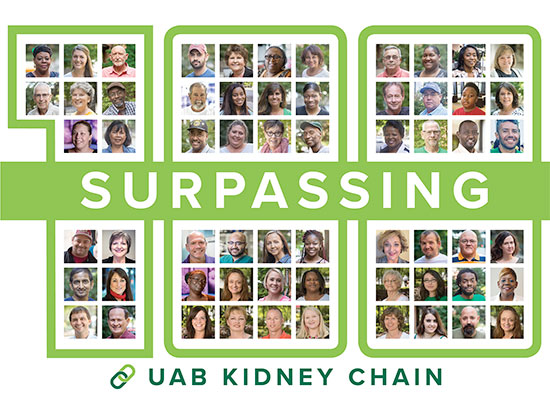 To date, 101 living donors have changed the lives of 114 recipients so far as part of the nation’s longest ongoing single-center paired kidney transplant chain, which is underway at the University of Alabama at Birmingham.

On July 20, Barbara Graybeal of Scottsboro, Alabama, and Betty Griffin of Eufaula, Alabama, became the 99th and 100th kidney recipients, respectively, as part of the UAB Kidney Chain.

The chain began Dec. 5, 2013, when Pelham, Alabama, resident and donor Paula King approached UAB about the possibility of donating a kidney to a stranger in need and was committed to donating a kidney despite not having an intended recipient. In a paired transplant chain, a donation like this can set off a series in which family or friends of recipients give a kidney to another person in need — essentially paying donations forward on behalf of a loved one.

Her desire led her to the South’s leading incompatible kidney transplant program, at UAB, the outgrowth of efforts spanning 45 years and more than10,000 transplants.

“To me, knowing that one person’s gift is the reason I’m here today with a new kidney is such a blessing,” Griffin said.

King, who now lives in Florida, says she is amazed and grateful that so many people have had the opportunity for a second chance at life.

“The UAB Kidney Chain is an impressive feat that shows how teamwork and innovation can achieve miraculous results,” King said. “I am humbled to be a small part of what has been accomplished thus far. I would encourage anyone who is considering donating their kidney to think about the impact they can have on someone else’s life. I would do it again without hesitation.”

“To me, these are miracles,” said Jayme Locke, M.D., surgical director of the Incompatible Kidney Transplant Program in UAB’s School of Medicine and coordinator of the chain. “This is a game-changer, a life-changer for these patients and their families and friends. And none of it would have been possible without the selflessness of the donors and the hard work of our transplant team of surgeons, transplant nephrologists, lab technicians, transplant operating room team, nurses and staff.” 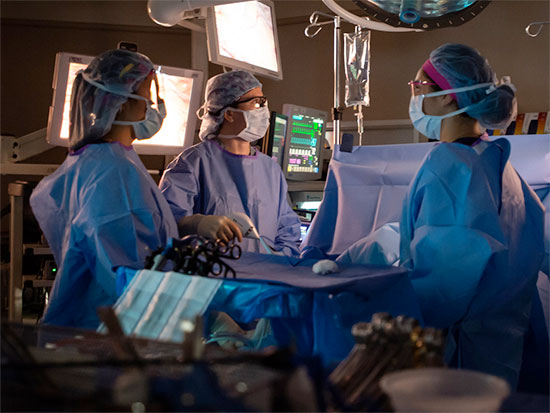 “From our perspective, this is a significant achievement for the 93,000 people around the country on the waiting list for a transplant, including almost 2,300 people here in Alabama,” Locke said.

Faces in the crowd

With more than 200 people from 12 states involved in the chain as donors or recipients, there are many stories of sacrifice, human kindness and gratitude.

Chalice Howard is a preschool teacher in her mid 20s now living in Charleston, South Carolina. Levon Madison is an 18-year-old high-school student from rural Pine Level, deep in the Alabama Black Belt. At first glance, they would not seem to have much in common. But two minutes after they met, Madison’s mother told Howard, “You’re part of our family now!”

That’s because Madison and Howard do, in fact, share something: Howard donated one of her kidneys to Madison, who was born with a disease that caused his own kidneys to deteriorate, as part of the UAB Kidney Chain.

For Divyank Saini, a former UAB lab technologist that worked behind the scenes at UAB Hospital to bring hope to those waiting on heart, lung, kidney, liver and other transplants, interpreting lab samples to see which folder would match which was not quite enough. In 2016, Saini decided to donate a kidney to someone in need as part of the UAB Kidney Chain.

Derek Lambert, of Florida, shared what it meant to him to donate a kidney to help his friend, Mickey Little, and save the life of a young mother. That young mother, Louisiana's Allison Nelson, shared her lifelong battle with polycystic kidney disease and how her new kidney would enable her to be there for her children.

On Aug. 6, 2015, North Carolina native Jerry Phillips received the gift of a new kidney at UAB Hospital as the 50th transplant recipient as part of the chain, thanks to a Mississippi woman who was a complete stranger. 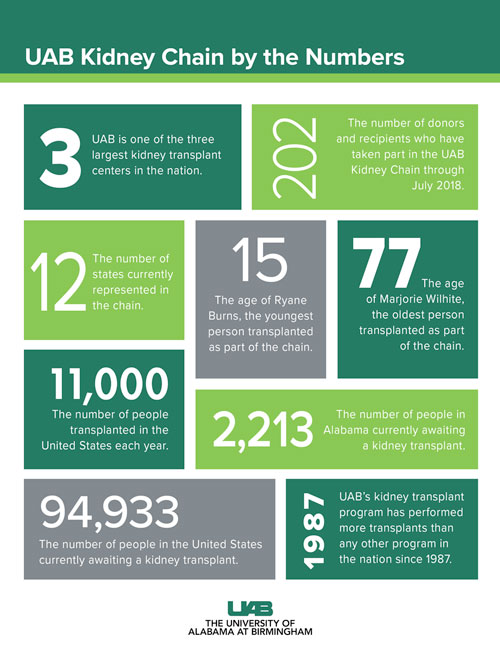 And just last fall, 27-year-old Birmingham native Tyler Williamson was moved to become a living donor after hearing Locke speak about the national waiting list for kidney transplants at a TEDx Birmingham event. Williamson’s kidney went to Hoover, Alabama, resident Jay Ernst, a 34-year-old husband and father of two who had battled kidney disease for almost 20 years. They were the 77th donor and recipient as part of the UAB Kidney Chain.

Since the UAB Kidney Chain began four years ago and has grown quickly through the generosity of paired donors and 18 altruistic donors, Locke maintains that it stands as a national example of the best of us and what could be.

“Every time someone comes forward to be a living kidney donor — whether they know someone they want to donate to or on behalf of — I just marvel at it,” Locke said. “They are all extraordinary individuals, and they really represent the very best of our country and the world.”

That is where her idea of the single, national living kidney donor exchange program — which she presented at TEDx Birmingham in 2017 — carries the possibilities further.

“If you have a pool of donor and recipient pairs that is large enough — like a national registry these pairs could enter into — you could greatly enhance the opportunity for those in need to achieve a match,” said Locke, who is currently in South Africa to help that country broaden its transplant capabilities. “That’s my biggest hope, that people invest and can wrap their minds around the concept and really get behind living kidney donation. It really will take a movement at a national level to get every American behind this concept so that we could actually see a single, national registry come to fruition.”

“This has absolutely changed my life,” Graybeal said. “This is truly a gift, and there is no way I’m going to mess up my second chance.”

More transplants in the UAB Kidney Chain are scheduled in the future. Those interested in exploring the possibility of being a living organ donor can fill out UAB’s online Living Kidney Donor Screening Form. To become an organ donor upon death, register now at www.alabamaorgancenter.org.

To learn how you can become a living donor, or to read donor and recipient stories, and follow the chain, visit uab.edu/kidneychain online and #UABKidneyChain on Twitter.