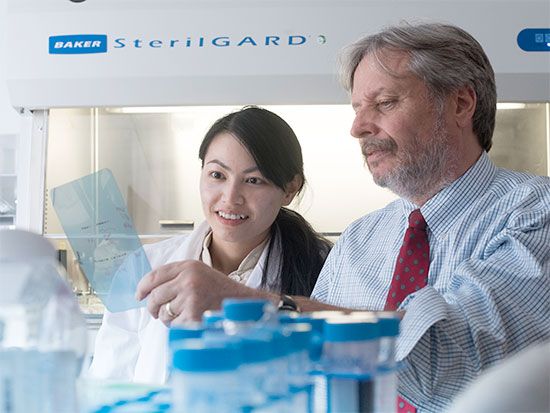 Graduate student Thi Nguyen and Steve Duncan, M.D.It all began with the simple task of burning leaves. Maybe there was some poison ivy among the leaves. Maybe not. Donna Lisenbee doesn’t really know. Neither do the physicians at the University of Alabama at Birmingham who saved her life.

They know she had severe lung damage. They know she had something called diffuse alveolar hemorrhage and was well on her way to acute respiratory distress syndrome, or ARDS. Poison ivy most likely was not involved, but they do not know what caused it — the diagnosis remains “unspecified lung disease of unknown cause.” The good news for Lisenbee, a mother of three with six grandkids, is that she ended up at UAB, where diseases of unknown cause sometimes meet their match.

Lisenbee, of Boaz, was burning a leaf pile in June of this year. About a week later, she developed a rash and then had trouble breathing. The first diagnosis from a local hospital was pneumonia. As her condition worsened, she was transferred to the intensive care unit of a second hospital, where doctors thought the culprit was ARDS. She improved after a month in ICU and was sent home, but soon regressed.

She returned to the ICU with kidney damage and another troubling symptom. She was spitting up blood.

A sister, Debi Luther, who works as a nurse in Florida, did what so many people do when faced with a perplexing medical issue. She turned to the internet and soon found an article about a new, experimental protocol underway at UAB for a devastating lung disease called idiopathic pulmonary fibrosis. On Sunday, Sept. 10, Luther sent an email to Steve Duncan, M.D., a professor in the Division of Pulmonary, Allergy and Critical Care, Department of Medicine, who heads up that project.

“We are an academic medical center, the major referral hospital for Alabama and the region,” Duncan said. “When the cause of a disease is unknown, when even the name of a disease cannot be determined, UAB is the place to turn. When I saw the email, I knew we had to get involved.” 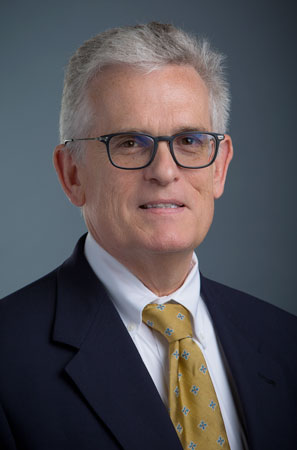 Vincent Valentine, M.D., UAB pulmonologistDuncan got on the phone that Sunday afternoon to pulmonary medicine colleagues Vincent Valentine, M.D., Keith Wille, M.D., and Victoria Rusanov, M.D., Ph.D., and arranged to have Lisenbee, intubated and requiring mechanical ventilation, transferred to intensive care at UAB. Valentine did a bronchoscopy and found blood in her lungs, the alveolar hemorrhage syndrome. The lung damage severely restricted her ability to breathe, so she was placed on ECMO, or extracorporeal membrane oxygenation.

“ECMO takes on the function of the heart and lungs by routing the patient’s blood into a machine where carbon dioxide is removed and oxygen is added,” Wille said. “The blood is then pumped back into the body. This allows the lungs to rest and heal while the machine keeps the patient alive.”

The experimental use of ECMO for lung disease is being pioneered at UAB. The machine is commonly used in heart bypass surgery, but few hospitals are prepared to use it long term to replace the function of the lungs. UAB has supported more than 450 pulmonary patients with ECMO in the past five years, making it a leader in the field.

Cardiothoracic surgeon Chris Bellot, M.D., performed the surgery to place the tubing used to transport blood to the ECMO machine — known as cannula — in Lisenbee’s neck. She was on ECMO for 12 days, on dialysis for 13. She was, as Valentine told her, the sickest patient at UAB and perhaps the sickest in Alabama. As the team examined her symptoms, there were more and more indications that another experimental protocol was a viable option.

That experimental protocol, aptly named the Duncan protocol, begins with therapeutic plasma exchange. It involves removing autoantibodies from the blood stream, coupled with the administration of two drugs to combat B cells, which are responsible for the production of autoantibodies.

“This was a complicated case, without a simple diagnosis,” Duncan said. “There were clues that pointed to an autoimmune disease, which are caused by a dysfunctional immune response. Plasma exchange has been used successfully in other autoimmune diseases, and we came to the conclusion that it was worth trying here.” 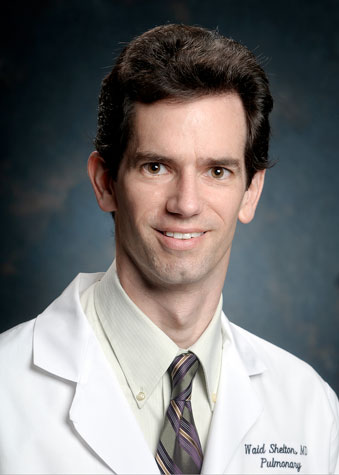 Keith Wille, M.D., UAB pulmonologistAutoimmune disease occurs when the body creates autoantibodies that attack its own proteins. The Duncan protocol uses a technique to remove autoantibodies from the bloodstream, followed by a drug, rituximab, which attacks B cells, and intravenous immunoglobulin, which blocks residual antibodies following plasma exchange. Lisenbee underwent 12 plasma exchanges over 18 days.

It is an experimental procedure. Duncan has done one study with 11 patients with IPF, and is now leading a multi-site study with another 51.

“Without ECMO, she certainly would have died,” Valentine said. “I could argue that, without plasma exchange, she still would not have survived. The lining of her lungs was blistered from an apparent autoimmune attack resulting in alveolar hemorrhage and diffuse alveolar damage. ECMO gave her lungs time to rest so that peeling and healing could run its course. Plasma exchange for the immediate reduction of the culprits of injury, the autoantibodies, followed by rituximab for long-term reduction and IVIG to bridge the short- and long-term gaps, appear to have done the rest.”

“It was a miracle, I think, as a lot of people who were as sick as I was don’t recover,” Lisenbee said. “I feel like prayers and faith in God opened the doors to get me to UAB to receive the medical treatment needed. I don’t think I would have made it if Dr. Duncan hadn’t answered my sister’s email, and if the plasma exchange hadn’t been an option.”

“We have tools here, options that we can try when other approaches aren’t working,” Wille said. “The combination of these therapies was essential, and these therapies are not universally available. The strength of UAB is that we have the knowledge, the tools and the will to use them.” 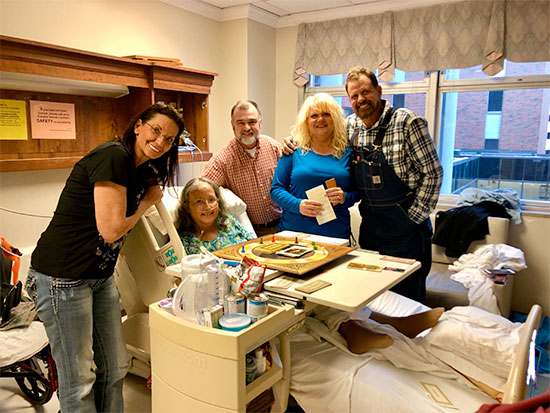 Donna and family playing Masterpiece at Spain Rehab.“This is innovation, the stretching of boundaries,” Valentine said. “It is what academic health centers do, as we are at the frontiers of progress. At one point, she was the sickest of the sick; but Donna Lisenbee went home the other day, a testament to the highly trained bedside nurses, skilled perfusionists, inquisitive physician-scientists and the cutting-edge technologies available here.”

Lisenbee’s family gathered at her room in Spain Rehab shortly before her discharge. All three siblings were there, and Debi brought a treasure from their childhood. One Christmas Eve, 47 years ago, the three — Donna, Debi and Tommy — woke up during the night. They sneaked into the living room, and opened some of the presents under the tree. One was a board game, Masterpiece. They played it in a bedroom until their parents awoke on Christmas morning, a lasting family memory.

Debi brought the game to the hospital room, and they played Masterpiece again.