The long-term impact on someone’s lungs while vaping — the act of inhaling and exhaling the aerosol, often referred to as vapor, which is produced by an e-cigarette or similar device —  is not yet known, and there is no hard evidence that shows whether poor air quality where a person grows up puts them at higher risk for respiratory conditions later in life. These issues, and much more, will be examined in a large, first-of-its-kind longitudinal study of lung health, funded by the National Institutes of Health.

The study, titled “The American Lung Association Lung Health Cohort,” is supported by a $24.8 million grant awarded by the National Heart, Lung, and Blood Institute (NHLBI), part of the NIH. The University of Alabama at Birmingham will serve as a major study site.

In this first federally funded U.S. cohort to study millennials, scientists will capture baseline lung health measurements of 4,000 healthy adults between the ages of 25 and 35 to identify an ideal picture of respiratory health and understand the key risk factors and biomarkers that are associated with impaired lung health.

While the risks of smoking cigarettes have been well-documented in epidemiological studies, vaping is a relatively new and understudied trend.

“The long-term impact of e-cigarettes and vaping is not known, and it is possible these habits are as harmful as smoking,” said Mark Dransfield, M.D., the William C. Bailey Endowed Chair in Pulmonary Disease. “It is critically important we understand their health effects as millions of young people are now using these products.”

Findings from the study will arm doctors with information to recognize respiratory problems early and intervene before patients develop chronic lung disease, the fourth-leading cause of death in the United States. The long-term goal of the study aims to identify who is at risk for developing chronic lung diseases such as chronic obstructive pulmonary disease (COPD), emphysema and pulmonary fibrosis.

Some study participants will be smokers, and some will not. Some will live in cities, and others will live in suburban or rural areas. The aim is to recruit a wide range of healthy adults. 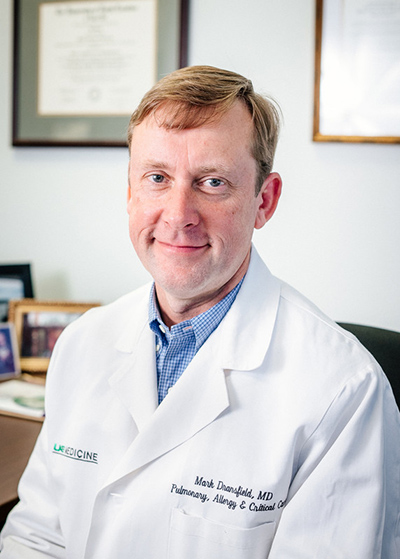 Mark Dransfield, M.D.The scientists will leverage the national infrastructure of the American Lung Association’s Airways Clinical Research Centers to recruit study participants from its 17 metropolitan centers across the country. The UAB Lung Health Center and Children’s of Alabama Pulmonary Clinic are among those centers.

Scientists will follow these individuals for six years after their initial interviews to track how their environment, lifestyle and physical activity habits affect their respiratory health. The goal is to renew the grant so the scientists can continue to follow the study participants for the rest of their lives.

Participants will be measured on their exposure to smoking, drinking and vaping; have a nutritional assessment; wear physical activity monitors; and self-report symptoms such as fatigue and sleep disturbances.

The scientists will ask study participants where they lived at key times in their lives (e.g., when they were born, started kindergarten, high school, etc.) and use satellite modeling that measures airborne particulates to determine an environmental measurement of their life-course exposure from birth to adulthood.

Dransfield, who also serves as the medical director for the UAB Lung Health Center, says Alabama has a disproportionate burden of respiratory disease and among the highest rates of asthma and COPD in the country.

“We have known that smoking and air pollution contribute to lung disease,” Dransfield said. “But our understanding of other risk factors, particularly in youth and young adulthood, is limited, and this has hampered preventive efforts.”

Northwestern University is the primary recipient; but scientists from Johns Hopkins Medicine, Brigham and Women’s Hospital, University of Michigan, UAB, Beth Israel Deaconess Medical Center, and more will also be collaborating on the research along with other institutions from the ACRC.